Q. What is karate?

A. Karate is a martial art and system of self-defence that originated hundreds of years ago in Okinawa, but was greatly influenced by an even older tradition from China. Literally, Karate-do means the way of the empty hand, referring to the fact that its practitioners use no weapons to attack and defend, but only the hands, feet, and body. Yet karate is much more than merely physical. It is founded on a grand philosophical and spiritual tradition based on Bushido and Zen Buddhist principles. Through hard training and practice, karate develops not only the body, but also the mind and character.

Q. What is the purpose and goal of karate?

A. The ultimate purpose of karate is not physical prowess or the winning of matches, but the development of balance, harmony and spiritual and physical strength through strict, disciplined training. Karate schools you in natural, effortless action, and imbues you with an openness, peace and wholeness of character that vastly enriches day-to-day life.

Q.What is the JKA?

A. With members in over 100 countries, the Japan Karate Association (JKA), is the world’s largest and most prestigious karate organization, and the only legal karate entity officially recognized by the Japanese government as an association of members for the promotion of karate. More importantly though, we are The Keeper of Karate’s Highest Tradition, the preserver of the soul and spirit of the art of karate in line with the tradition of Bushido (the way of the samurai). Our mission is to promote the way of karate throughout the world, while ensuring that it remains true to the philosophical precepts upon which it was founded. This has been our mission since the establishment of the JKA in 1949.

Q. What sort of karate does the JKA teach?

A. The JKA is the generally-recognized heir to the Shotokan karate tradition as developed by Supreme Master Funakoshi Gichin, and teaches a specially-refined form of Shotokan style karate.

Q.What is the Shotokan style of karate?

A. Shotokan karate is one of the most widely practiced forms of karate in the world today, and one of the most traditional. Introduced to Japan from Okinawa by Master Funakoshi Gichin, Shotokan puts heavy focus on kihon (basic techniques), kata (forms), and kumite (sparring) to develop a range of powerful and dynamic techniques. The designation ”Shotokan” derives from ”Shoto” which was the pen name Master Funakoshi used when writing poetry. The JKA has refined the Shotokan style even further, creating a related, but unique style all its own. The strength of this style proves itself time and again: the JKA has by far the largest number of All Japan and international karate tournament champions.

Q. What is the JKA’s philosophy of karate?

A. At the JKA, karate is not a sport or a game of points; it is a way of life based on Bushido. In true karate, the body, mind and spirit―the whole person― must be developed simultaneously. Through intense practice, the physical and mental aspects of karate can be brought together. The result is natural, effortless action, and the confidence, humility, openness and peace only possible through perfect unity of body and mind. This is the core teaching of Zen, the basis of Bushido, and the cornerstone of the JKA’s karate philosophy.

Q. Can anyone practice karate?

A. Yes! The only real requirement is a disciplined commitment to work hard and train patiently. As long as that commitment is there, karate is for everyone ―regardless of age, sex, or ethnic background.

Q. Do I need to be in excellent physical shape to start karate?

A. Not really. Since karate will gradually improve your fitness as you progress, your starting point is less important than the effort you put into it along the way. At the JKA, our traditional focus on the basics and on correct form make it easy for beginners to train together with experienced individuals yet still progress at their own level of fitness and expertise. If you are less fit, your progress at the start will simply be more moderate; as your fitness improves, so will the pace at which you advance.

Q. What is expected of me if I join?

Q. What will training involve?

A. A typical karate practice session usually begins with a comprehensive warm-up, followed by the various training exercises. The exercises are divided into three main categories: kihon (basic techniques), in which you learn the basic blocks, punches, kicks, stances, etc. of karate; kata (forms), in which you practice and physically remember the various kihon learned; and kumite (sparring), where your kihon and kata techniques are matched against a real opponent. As your skill level increases, so will the difficulty and degree of the exercises. Of course, there will also be times when you are taught theory, dojo etiquette, and the more philosophical aspects of karate.

Q. What are the benefits of traditional karate training?

Q. How long does it take to learn karate?

A. It’s really up to you. The more you practice, the more you will improve ―for your entire life. There is no limit to mastering karate, no ”final destination” at which you can arrive. There are benchmarks along the way however. In the JKA, you progress through a series of belt levels (9th to 1st Kyu). After that, you receive a black belt, and progress through another 9 degrees of black belt (1st to 10th Dan). A student with no prior training joins the JKA as 9th Kyu, and is eligible to take ranking examinations every 3-4 months of training. Since there are 9 examinations you must pass to attain a black belt, the 1st Dan requires a minimum three years of diligent training. It takes several years to attain each subsequent Dan. At these higher levels, you will see that karate is not just something to be learned, but something to be lived. And that takes a lifetime.

Q.Do I have to wear a karate uniform?

A. Eventually, yes. Karate uniforms (dogi) are usually available through your instructor. Inquire at your dojo for more details.

Q. How do I become a member?

A. Joining the JKA requires filling out an application form and paying the appropriate membership fees. The JKA offers two kinds of membership: Group Membership, for those wishing to affiliate their dojo or karate group in their country with the JKA through the JKA World Federation; and Individual Membership, for people interested in joining the JKA as an individual and attending one of our dojo near them. Click the in-text links for more details.

Q.How much does membership cost?

A.`The cost of a JKA membership varies greatly by region and country. Please contact the authorized JKA representative in your country for information on the specific fees required in your area.

Q. Can fees be sent directly to JKA HQ?

Q. Is there a JKA dojo somewhere near me?

A. Probably. The JKA has branches in well over 100 countries, so there’s bound to be one of our dojos nearby. Check with the authorized JKA representative in your country for information on the closest dojo to you. Once they have information about a JKA dojo, many people like to call and talk to the instructor, ask questions, etc. Many also prefer to go in person to observe how a typical class is run. You can make any such arrangements directly with the instructor once youfve received the dojo information from our representatives.

Q. Where is the Tokyo JKA HQ located?

Q. Can I train at the Tokyo JKA HQ Dojo?

A. Yes! We are always very happy to welcome you as our guest. Every year, a number of members from around the world visit Japan and train for a few days or weeks at headquarters in Tokyo. It’s always one of the highlights of their karate experience. If you are interested, find out more here, or send us an email at sohonbu@jka.or.jp with your specific questions.

Q. Where do I stay in Tokyo?

A. There are a number of reasonably-priced hotels close to Tokyo JKA HQ. Click here for a list of nearby accommodations.

Q. I am going to Japan, but not to Tokyo. Is there a JKA dojo nearby?

A. Probably. The JKA has hundreds of dojos all across Japan. Send us an email about the specific municipality you will be visiting, and we will get back to you. sohonbu@jka.or.jp 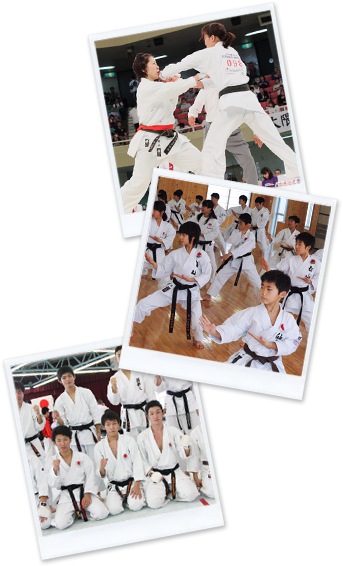