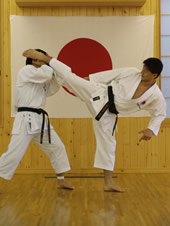 JKA karate has remained essentially unchanged throughout its history. Each student learns each technique and tradition in its original and most powerful form. As a result, the JKA produces some of the strongest and most skillful karate-ka in the world. There are a number of practical factors that make JKA karate different from other karate traditions. Here are some of the main ones:

JKA karate is a unique refinement of the Shotokan style, one of the oldest and most traditional types of Okinawan karate. Since it descends directly from such “original” sources, it has developed from strong roots underpinned by a long history and a great tradition.

JKA Karate Is Scientific and Is Constantly Being Improved

Every technique and movement in JKA karate is based on solid, scientific, physical movement theory. That’s why we put such heavy focus—far more than any other organization—on kihon, the basic foundational techniques, and their proper form, angle and balance. The result speaks for itself: JKA karate is powerful, solid, stable, and smooth flowing; this has proven itself time and again in tournaments. Despite the excellence of JKA karate, however, it is constantly being improved.

All of the JKA’s instructors are full-time professionals trained for an extensive period specifically to be instructors. They are not part-time teachers, nor are they arbitrary in their teaching. Their dedication to teaching the way helps ensure that the true essence of karate is passed on to each student. And this devotion shows in each student’s technique.

Unlike any other karate groups, the JKA offers a specialist instructor training program for students who show exceptional capability and prowess in karate. Students take a rigorous entrance exam and tests, followed by two years of intense study and practice at the Tokyo JKA HQ Dojo. They are required to write and submit monthly research papers on specific themes given by their instructors, thereby showing their ingenuity, willingness and devotion to karate. Those that successfully graduate from this program, and can meet the stiff requirements, are accepted as professional instructors. This very strict approach ensures that the scientific foundations and traditions of JKA karate are maintained.

JKA Karate Has No Weight Classifications or Half-Point System

Karate is not a sport one plays for points. In JKA kumite, there are no weight classifications and no arbitrary point system. Other karate groups often award multiple points (e.g., 3 points for a kick to the head, 2 points for a kick to the middle body, 1 point for any kind of punch), which can be tallied up to a win at their tournaments. But JKA tournaments are much stricter. At the JKA there is only ippon (“one full point,” which means you have downed your opponent and won), or waza-ari (“effective technique,” which counts for roughly 80% of an ippon). The basis of JKA karate is the ability to take down your opponent, regardless of size or weight, with one blow. There is no room for incremental points in such a tradition. The difference is obvious: we teach our students how to gain mastery of themselves and overwhelm the opponent.

The JKA carefully selects its Chief Instructors from the Shihankai, based on the individual’s experience, strength and integrity. This is an advantage, since many karate organizations with a strong founding leader pass on their leadership position to an inheritor once the master is gone. The inheritor may be a weak leader, and so the organization begins to lose its way, and eventually may even disappear. There is no such danger at the JKA because the Chief Instructors are always elected by the group. They are always strong leaders. The JKA is far better organized than most other karate groups, and with its strong democratic tradition it has a staying power that few others can match: the JKA is forever.

JKA Is Devoted to the Practice of Karate

Unlike many other karate organizations, the JKA was not created as an organization whose major purpose is holding matches and tournaments. Though it does sponsor tournaments, its major focus is the practice of karate. Its purpose is the teaching of karate as a way of life.