A Brief History of the Japan Karate Association 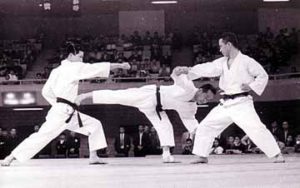 Originally, the martial art Te (“Hand”) developed in Okinawa as a system of self-defense. Due to Okinawa’s frequent contact and exchange with China, it is certain that the Okinawan martial art was influenced by Chinese kempo at some point during its development. However, with only oral tradition and no formal contemporary written records, it is not certain exactly when the art called Kara-Te first emerged in Okinawa. It is believed that it developed roughly 500 years ago, when the dynastic ruler King Shoha unified the region after decades of warfare and issued an edict banning the possession of weapons on the island.

According to conventional accounts, a similar law forbidding the possession or use of weapons was re-issued and enforced by the Satsuma clan, who had invaded Okinawa in the early 1600’s and brought it under the rule of the Japanese Shogunate. It is believed that in this environment karate developed as a form of unarmed combat for protecting oneself and one’s country, and it was taught and practiced in secret.

Then came the birth in 1868 of Okinawan karate master Funakoshi Gichin. He dedicated his whole life to promoting the values of the art, and introduced the way of karate-jutsu to Japan, where it spread across the country. By 1949, his followers had established an association for the promotion of karate; they called it Nihon Karate Kyokai, or Japan Karate Association. It was the beginning of the JKA…

More on the history of the JKA: 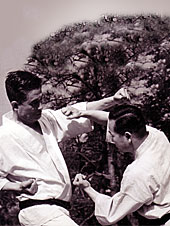 The JKA was founded in November, 1948. By 1955, the first headquarters dojo had been built at Yotsuya in Tokyo, and the first JKA Chairman had been appointed: Saigo Kichinosuke, member of the upper house of the Japanese Diet and grandson of Saigo Takamori, one of the greatest heroes of Meiji Japan. In 1956, the JKA set up the first-ever karate specialist instructor intern (kenshusei) training program at the headquarters dojo, and accepted its first round of trainees. This was the start of the finest karate instructor training program ever created, a program never matched or even approached by any other karate organization. It is through this program that the JKA has built up its unique cadre of distinguished karate instructors, all full-time salaried professionals— whose numbers are consistently maintained at roughly twenty individuals.

On April 10, 1957, the JKA became a legal entity when Japan’s Ministry of Education (now Ministry of Education, Science, Sports, and Culture) officially recognized the JKA as an association of members for the promotion of karate and the spread and enrichment of actual karate practice. Twelve years later, another karate organization was also given legal status, based not on membership but on contribution by an individual foundation, mainly for the purpose of arranging karate matches.

Roughly two weeks after official status was granted, Supreme Master Funakoshi passed away at the age of 89. After almost a decade of milestones, it was the end of an era. But the real growth of karate was yet to come. 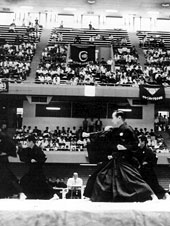 Karate’s popularity continued to grow. In October 1957, the 1st JKA All Japan Karate Championship was held in Tokyo. At this first tournament, the first karate match rules tournament in history, the number of divisions was limited to four: men’s individual (general) kumite and kata, and men’s group (Prefectural) kumite and kata.

Once this annual tournament system was established, it wasn’t long before there were JKA karate branches in towns, schools and as many as 40 prominent universities in Japan. In 1958, Master Nakayama was appointed Chief Instructor. In 1961, His Majesty the Crown Prince of Japan (now His Majesty the Emperor of Japan) attended the 5th JKA All Japan Karate Championship. JKA karate was getting noticed.

During this period, the JKA further developed its karate instruction system, and while greatly expanding its branch dojo throughout Japan, began sending (as early as 1958) some of its most highly-accomplished professional instructors overseas to America, Europe and the Middle East to teach and establish dojo. Karate was becoming a big hit outside Japan too.

In 1975, with karate’s prospective entry into the Olympics in mind, the first JKA-sponsored international tournament, the IAKF (International Amateur Karate Federation) World Cup was held in the U.S.; over the following several years it was held three additional times. However, in order to preserve the true technique and spirit of ippon-shobu (downing the opponent with one blow), the JKA ultimately established a new tournament, the Shoto World Cup Karate Championship Tournament. In 1985, the first international Shoto World Cup was held in Japan, a testimony to how much karate had become an international art.

This period witnessed spectacular development in the art of karate.As a result of continuous training among instructors, the karate techniques were developed into a complete system. For the first time there emerged a clear, scientific, and practical “best” form for each kumite stance, posture and movement. There also emerged a clear delineation between the “correct” and “incorrect” way to execute each stance, punch, kick or technique.

Once these techniques developed, many instructors went overseas to spread the art of karate around the world. The JKA was the first karate organization to set up dojo outside Japan. This is the reason the JKA is so prominent and powerful overseas.

Furthermore, the JKA became the only karate organization to send its qualified full-time instructors to teach karate at universities. In contrast, some other universities simply have one of their old students hold karate classes.

In 1986, Nakahara Nobuyuki, a distinguished business leader and former Tokyo University Karate Club member, was appointed the eighth Chairman of the JKA.

Sadly, as JKA karate was reaching a pinnacle, Master Nakayama passed away, in 1987. He was 74 years old. 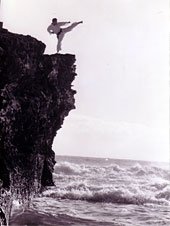 In 1990, the JKA was rocked by crisis when a faction within the organization seized the JKA’s official status. The group called an extraordinary General Assembly meeting, but did not identify the agenda or state the purpose as legally required. After this unlawful meeting, the faction succeeded in illegally changing the official executive register. Thus began a long period of litigation.

Despite this, the JKA continued to progress. The overwhelming majority of members and instructors remained loyal to the original and true JKA. Then Master Sugiura Motokuni was appointed to the position of Chief Instructor in 1991. Together with Chairman Nakahara, they began initiating a return to the true spirit of karate—just when that spirit was needed most.

In 1994, the JKA published the first in a series of five authoritative text-books on kata. This series quickly became the “bible” of karate kata.

Then came the court rulings. In 1995, as members had long expected, the JKA won the case in Tokyo Local Court. In 1998, it won again in Tokyo Higher Court. Then in June 1999, the Japan Supreme Court rejected the appeal of the seceded group, and the case was closed once and for all. As a result, the legal executive register was restored to the state it was in before the faction had so forcefully changed it.

In the end, the JKA had not only weathered the challenge, but had grown stronger because of it. It had gained more internal cohesion and a stronger sense of identity than ever before.

The JKA Leaps Forward into the 21st Century (2000 to present) 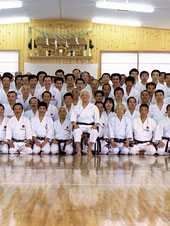 With its legal status restored by court rulings, the JKA leapt into the 21st Century. It restructured its internal organization, and also reorganized its financial base.

In December 2000, it purchased land and established a brand new headquarters and dojo in the center of Tokyo. This was the first time the JKA had owned its own land and building. The grand opening ceremony was held in May 2001, attended by numerous dignitaries and many members from other karate organizations.

With renewed vigor, the JKA repositioned itself, clearly defining itself as ‘The Keeper of Karate’s Highest Tradition.’ In 2004, it launched a new official website, through which it continues, as always, to promote true karate around the world.

The Japan Karate Association (JKA) was originally established in 1948 as a not-for-profit organization. Based on its significant contribution to society through a number of activities, the Japanese Ministry of Education recognized JKA as SHADAN HOJIN (incorporated association) in 1957. Through continuous contribution and its commitment to society, JKA was further recognized by the government of Japan as KOEKI SHADAN HOJIN (public interest incorporated association) on March 21, 2012. JKA is the only Japanese martial arts associations to date to be given such recognition by its government.

The mandate of JKA is to contribute to world peace through 1) conducting research and providing instruction of Karate-Do, 2) influencing children and adolescents to improve their physical and mental health as well as cultivating the spirit of martial arts, and 3) wide distribution of the concept of Japanese martial art which emphasizes manners and respect.