25 December Shiina Sensei had arrived in Kolkata from Chittagong, Bangladesh and warmly welcomed at the airport by about 25 karate students and instructors that included the board members of the JKAWF INDIA Kolkata.

26 December was the first day of the camp that was attended by 500 karateka from the various parts of the country. We were honored by august presence of the Honorable Consul-General of Japan in Kolkata Mr. Masayuki Taga as the Chief Guest; Mr. Premjit Sen the President of Karate-Do Association of Bengal (The WKF body for karate in West Bengal) and other dignitaries beside Katsutoshi Shiina Sensei from the JKA HQ. The inaugural ceremony has kicked off with the national anthem of Japan followed by the national anthem of India. Once all the guests were welcomed in traditional Indian rituals and flower bouquets; the dignitaries were requested to address the crowd of over 600 people present that include 500 participants and over 150 parents. Mr. Taga welcomed Shiina Sensei for coming to Kolkata to teach the budo way of karate and appreciated the organizers of JKAWF INDIA Kolkata for their hard work in promoting karate as “martial art”. Mr. Premjit Sen has handed over the membership certificate of “Karate-Do Association of Bengal” for JKAWF INDIA Kolkata and thanked Shiina Sensei for his presence in Kolkata to conduct training leaving his family during Christmas. He congratulated all 500 karateka present for their enthusiasm and love for JKA karate and expressed his great satisfaction for the grand way of organizing the camp. Shiina Sensei explained the importance of JKA karate which is “budo karate” and not just sport. He asked all to try understanding and consider karate as “way of life”. Once the training started Shiina Sensei covered the fundamental moves, basics of JKA karate followed by some combinations of basic techniques that require concentration in foot work. He did cover Heian Shodan through Heian Sandan and their Bunkai. Various Kumite drills have been taught against multiple attackers that require extreme concentration, speed and stamina. He taught Bassai-Dai in the brown and black belt session and explained Bunkai and Oyo of different key moves.

27 December was the second day of the camp that was attended by the same participants and started at 11 am. After surfing through some of the basic moves sensei has revised the same Heian kata that had been practiced on 26th and had cover Heian Godan and Tekki Shodan too. Lots of focus was given on correct hip works that require generating power in Tekki kata. Bunkai for Heian Godan has been practiced with multiple partners; first in slow motion and then gradually in full speed like kumite. Kata Jion has been covered in the brown and black belt session with bunkai. This was the last day for the two-day general camp and the students and the parents were overwhelmed with the way of teachings of Shiina Sensei. We had asked the students, both a few kids and adults and then a few parents those were present watching the whole camp for two days with great interest for their feedback. A small kid said that he had learnt many things from the camp and highly impressed by sensei’s kicks. He said that he will practice every day the way sensei has taught and will try to be a world champion like Shiina Sensei. An adult participant expressed his satisfaction with the very strict atmosphere created by Sensei that helped him and others to concentrate and focus. The parents expressed their gratitude to the JKAWF INDIA Kolkata for hosting this camp in such grandeur, inviting a legend like Shiina Sensei from the JKA HQ and thanked sensei for his patience and attention in teaching kids. A half of an hour long photo session took place to satisfy all at the end of the day when everybody left requesting sensei come back again soon.

In the evening we had our “JKA Kolkata Gala Buffet Dinner Party” at the banquet hall of the Spring Club exclusively for the instructors in the honor of Shiina Sensei’s visit to Kolkata. Everybody had a magnificent time together with Sensei.

28 December, the first half of the third day was scheduled for “Judges’ Seminar” that was attended by 30 candidates, mostly dojo instructors. Kumite judging terminologies and signals were practiced in length followed by practical act as judge where two contestants fought in the arena. The session was very

At the second half 21 candidates appeared for JKA Sho-dan test under the watchful eyes of Shiina Sensei. Sensei examined 3 candidates at a time to look closely the details of their moves. Everybody celebrated with joy to hear all passed as announced by Shiina Sensei. He then signed all the JKA Passports and handed over each to the respective candidates.

A beautiful “Cup” has been awarded to the candidate that got “good” (O-mark) in all segments of the Dan test whereas another “Cup” has been handed over to the “best emerging karateka of the camp” selected by Shiina Sensei. Three dojo instructors have been awarded with beautiful “Trophies” for attending the camp with maximum number of students as token of appreciation for their support.

The camp concluded with lovely memories to cherish for long time.

Nothing could have been better to thank Shiina Sensei by the first citizen of the state His Excellency Mr. Keshari Nath Tripathi, the Honourable Governor of West Bengal when he spared time for Shiina Sensei and the team that visited JKA HQ last October for a meeting in his Royal residence the Governor House in Kolkata on 28th evening. We all visited him and had a good talk on our present activities and future planning on promoting JKA budo karate in our state and it’s benefits, particularly in schools and universities.

To conclude this report we wish to thank Ueki Shuseki Shihan, Ogura Shihan, the Executive Director and the JKA Directors for their kindness and support to us. We look forward to the same to be continued in future. 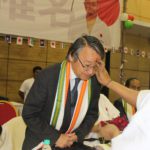 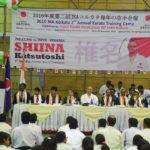 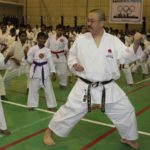 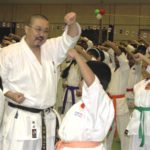 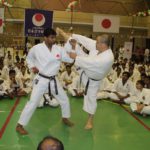 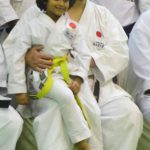 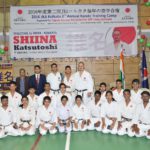 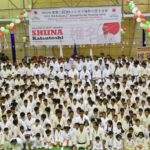