The Spring Gassuku, hosted by the RTKF (Russian Traditional Karate Federation, JKA Member since 2012 year), was the first to be conducted by a JKA HQ instructor in Russia, Shiina Sensei ( 7th Dan JKA HQ ). Within three days it was attended by 147 participants; thirteen of them passed Dan exams (thirteen earned the rank of 1st Dan and the rank of 2nd Dan); six completed the exams of Instructor , Examiner and Judge to C and D categories.

Shiina Sensei focused on kihon, kumite, kata and their application, instructor and referee/judge training. The first day of the seminar was devoted to the basic kihon, standardization of basic techniques, the Heian kata series, 1st and 2nd Dan kihon, practicing of oi-zuki (one sparring partner standing in front of the other). The training session targeted at black and brown belts contained practicing of oi-zuki in kumite (five sparring partners forming a zigzag) and standardization of Jitte kata. The second day included a general training session; kumite, gohon, jiu ippon, jiu kumite (black belts and colored belts practicing both together and separately); training of gyaku-zuki and moving with it; Jitte, Bassai Dai, Jion Kata for senior kyu grades and black belts. Special attention was given to the principles of body mechanics and application of these kata. Instructor, Examiner and Referee/judge seminars was devoted to the consideration of the terms and gestures as used by a sushin, theory and practice of Bassai Dai Kata and Jion Kata, and instructor, examiner and judge exams. The third day contained team kumite (five sparring partners forming a zigzag and three a triangle) based on a quick change from kihon kumite to Jitte Kata techniques and then to jiu kumite. This quick change of techniques was supplemented with that of attack direction, as there were five and three sparring partners, respectively. This training session was crowned with Jitte Kata.

Shiina Sensei put his whole soul into the training process. It was a fantastic experience. We will be glad to see Shiina Sensei again. OSS from Members of RTKF (RUSSIA)! 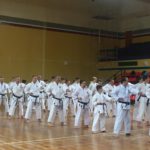 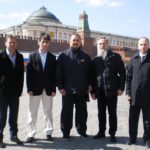 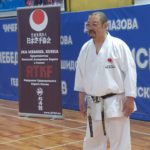 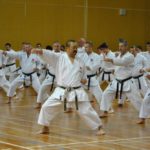 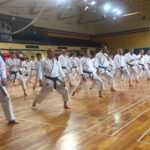 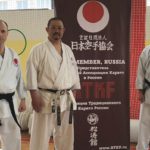 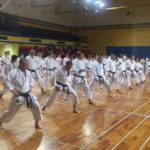 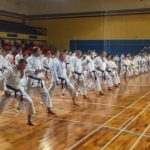 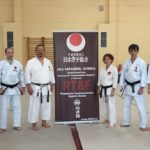 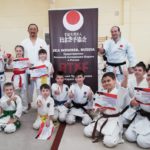