This second Gasshuku together with Ueda Daisuke Sensei was a step forward in training the practitioners of our JKA WF Romania-The National Karate Association.

There were athletes and instructors of the national association, and I did the training on grade groups. Thursday 19th April was the day when 150 children were trained, in two groups 9-8 kyu and 7-6 kyu. Ueda Sensei insisted on exercises and techniques that develop leg muscles and strong positions, along with basic techniques, and kata Taikyoku Shodan, Heian Shodan.

Friday, Saturday and Sunday, 20-21-22 April, were for 5-4 kyu and 3 kyu-dan training, 80 athletes and instructors. There were two training sessions a day, one morning and one afternoon for each group.

The main theme taught by Ueda Sensei was the development of correct and strong positions, kiba dachi, zenkutsu dachi, kokutsu dachi, leg movement and correct positioning of the hips.

These have been combined with hand and foot techniques – OI zuki, age uke, soto uke, gedan barai, shuto uke, gyaku zuki mae geri, yoko geri, mawashi geri. Also, the movements and the correct transfer of body weight from one position to another were taught and practiced. Ueda Sensei put a special emphasis on exercises to develop hip and ankle flexibility, and insisted on the importance of the support leg.

The gohon kumite and the kihon ippon kumite were emphasized for the clear direction of attack and the accuracy of the blows. All the five Kata Heian were practiced, and I also repeated tokui kata, Bassai Dai, Gankaku, Kanku Sho, Sochin, respecting the same principles of strength and strength of the leg positions and the correct movement of the hips.

Ueda Sensei also insisted on the continuity of movements and techniques, on concentration and attention to changing the direction of movement. It was a great quality Gasshuku taught by Ueda Daisuke Sensei, and very useful for all practitioners of our association, JKA WF Romania, present in training.

At the end of the last day, Sunday, April 23, the five candidates at the shodan exam, and candidate for the nidan exam, were successfully promoted.

The Sayonara party was a joyous reason for everyone present, and a time when plans for the future were made for the next Gasshuku.

Our event has been promoted on facebook social networking , on our jkaromania.com website, in the local press and television in Timisoara and Sannicolau Mare. 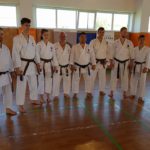 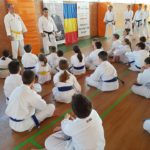 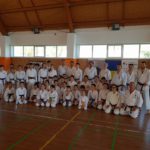 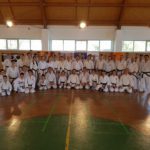 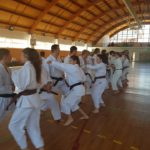 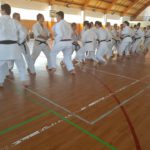 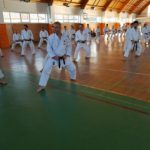 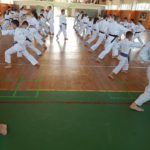 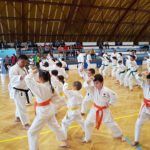 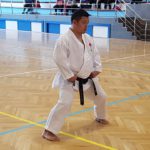 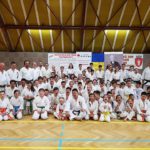 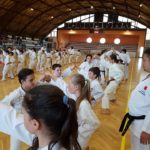