Mr. Katsutoshi Shihan is a Japanese Master of Shotokan Karate and the Head of JKA Japan Headquarter (South Asia Region) along with winning JKA’s version of the World Championships for Kata. He has also won the JKA All-Japan Championships for Kumite. He is presently appointed as an instructor of the Japan Karate Association.

The 10 Days Training Program was scheduled from 20th – 30th January 2018 and spread across Karachi, Islamabad, Sialkot and Lahore.

Program details is as under:

The morning of 23rd January 2018 marked the successful completion of the first stage of ‘The Training Program in Japan Consulate, Karachi.’ The Honorable Chief Guest H.E. Toshikazu Isomura – Consul General Japan in Karachi acknowledged JKA Pakistan’s contribution in promotion of JKA Karate in Pakistan and appreciated the enthusiastic participation of the Karatekas. He said that the reason for holding the training camps was to polish the capabilities and skills of the karatekas, to encourage them and to guide them to deliver their art in the most effective manner. He asserted that Japan and Pakistan share friendly terms and should unite together for the progress and betterment of various departments, to help each other and provide support when needed like currently Japan is assisting with training of Pakistani Karatekas.

Throughout the 3 Days of Camp Mr. Sensei Shiina informed the Karatekas of the rules of JKA Traditional Karate. He introduced Karatekas with latest the techniques and acquainted them with the tips and the tricks considered essential in JKA Karate.

A total of 80 karatekas participated amongst 20 were female students. It was wonderful to see that the participants reflected their great interest and responsiveness to what was being taught at the camp.

Later Mr. Sensei Shiina spoke on the importance of Karate Martial Art as being a comprehensive sport. While, talking to the audience he said, the art of karate was not only a way for protecting oneself, but also encourages mental and physical enhancement of the learner. It builds confidence and teaches respect and moral responsibility. According to him Pakistani people are physically blessed and should triumph with proper and diligent training.

The ceremony concluded with the handing out of memento to Sensei Shiina, H.E Tosikazo Isomura and course certificates to the Karatekas.

The camp kicked off on 24th January 2018 at Liaquat Gymnasium, Islamabad Sports Board Complex with the consent of Mr. Ashida Nori, Director Culture at Japanese Embassy in Islamabad.

The responsibilities were carried out by Mr. Tariq Ahmed representative of the JKA Pakistan in Islamabad on this event the Karatekas came from Lahore, KPK, Fata, Rawalpindi, Kalar Syedan, Islamabad.

A total of 200 participants and coaches attended the session including school children and the parents and media showed great enthusiasm.

The proceedings started with Rei followed by body warm-up exercises. The Sensei aimed the training at acquainting Karatekas with JKA Tradition Karate Techniques.

The first day spent based on introducing and polishing basic techniques of karate.

The 2nd day training session focused on Kata and Gohan Kumite. Young and adult karatekas participated with full enthusiasm and eagerness. The training began at 10 in the morning and lasted till 1 in the afternoon and all the junior karatekas were released after a hour n a half. Seniors were further trained for advance techniques. The arrangements and managerial responsibilities of the training camp were carried out by Principal Muhammad Basharat, Japanese Language Center, Lahore and Mr. Dilawar Hussain – SVP JKA- Pakistan.

The last day of Shihan Katsutoshi Shiina’s 10 day visit to Pakistan, so the training was narrowed to Geo Kumite and Kumite Rolls and the junior karatekas had been freed after an hour session in the beginning. The schedule of today’s class involved Belt Test, Referee Judging Course and Examiner Course.

At last the ceremony concluded with the token of appreciation being handed over to Master Katsutoshi Shiina from Patron Chaudhry Ghulam Abbas and President, JKA Pakistan handing one to Mr. Dilawer Hussain. 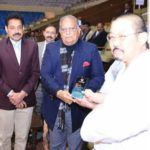 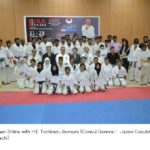 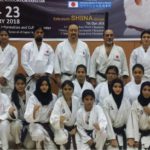 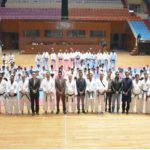 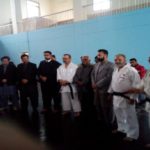 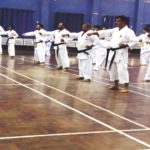 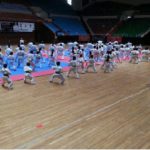 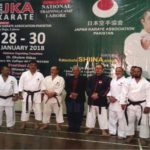 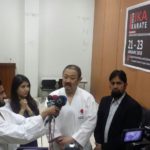 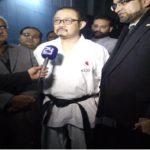