JKA Oman is rapidly growing up and spreading Karate in Oman, where twenty centers, more
than fifty black belt holders, more than one thousand participants and twenty years of
excellence and planned progress.
Successfully, JKA Oman organized the 12 international seminar with Naka Sensei and with
collaboration of the local bodies such as Nizwa Club and other organizations.
This event is well planned by Oman Karate Academy (JKA Oman) annual schedule which aims
to develop continuously the skills and techniques of JKA Oman members and other
international participants. Earlier, Naka Sensei visited Oman for six times, he supervised the
past six training camping. More than 150 participants as trainees and masters nationally and
internationally from 11 countries used to participate. 12th international gasshuku was
conducted in two different cities to attract more participants. The cities are Nizwa and
Muscat, capital of Oman.
The period from 5 – 9 February 2018.

Training program
The course came with an intensive training program for 4 hours divided into two training
courses. The first one was dedicated to the white belt to the green belt, where the Japanese
expert (Naka Tatsuya Sensei ) focused on the body and muscle contraction, as well as the
rotation of the center and its use for attacking.
He also applied to Kata Heian Shodan , Heian Nidan, Heian Sandan and Heian Yondan. He also
referred to the application of some kata movements. In the second session, which was
dedicated to the participants of the blue belt to black belt, the Japanese expert focused on
the rotation of the center and the body, the contraction and expansion of the muscle
practicing it with different techniques to clarify and to build strong image in mind.

The training was carried out on Kata, BasaiDai, BasaiSho, Gion and KankuDai with the
application of some techniques in it and explained the application in a practical way with a
focus on the contraction of muscles and its expansion, and the emphasis on the important
principles that must be built on the karateka doing Shotokan where the application through
the basic movements individually and once applied from.
During the kata session again where he gave a group of kata with similar techniques.

The expert also focused on the important points of movement of the body and the use of
hands and feet from the correct places to complete the movement correctly without
dispersing the strength of the body and he explained some defensive movements and some
errors. He applied also some movements to measure the extent of neuromuscular
compatibility of the participants through the exercises for fighting (Kumite ) and in the
conclusion of the course reviewed by different Katas.

Exam Program
On the fourth day of the course, Sensi Naka performed the Dan tests for some participants.

Participants feedback 1
Name: DAVE PAULUS
Country: ENGLAND
This was the first time I attended the Gasshuku organised by JKA Oman and I was very
impressed! The training with Naka Sensei was first class and the schedule was very well
planned to allow participants to enjoy the sites and experience the culture. Thank you very much for your hospitality!

Participants feedback 2
Name: Patrick Jokl
Country: GERMANY
As a participant from the first time since JKA Oman established this Gasshuku I see the
developments this event is making. This year the Gasshuku turned out to be an international
event with many participants from foreign countries like from Switzerland, Germany, France,
Austria, England, Sweden, many North African Countries and of course some GCC Countries.
All Nations trained together under the guidance of Shihan Naka and even there have been
some obstacles in understanding each other, languange- and cultural wise, Naka Shihan
managed it to create a harmonic and peaceful energy on that Gasshuku.
JKA Oman was a good host and took care for all things (except the beer) we needed. As Oman
is a very beautiful and magical country JKA Oman organized a special sightseeing tour to the
mountains. Our big international group had to survive the so called “Snake canyon”, which
included abseiling, climbing and swimming. After the canyon we spent the night in a lodge in
the beautiful Omani mountains, which was a nice experience too. Even the tour was quite
dangerous every participant made it finally and we all had the impression the tour forged us
together to a strong international team of JKA Karateka who are happy to see each other
again at a similar JKA event somewhere around the world. 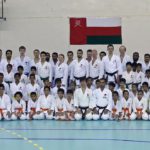 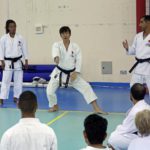 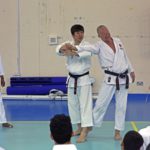 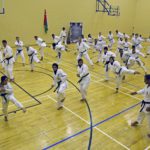 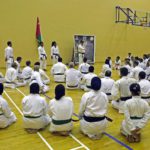 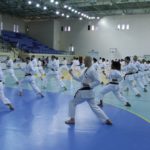 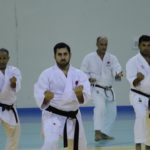 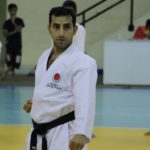 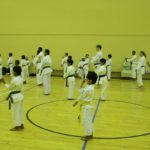