SA JKA has a fantastic history of visits by top JKA WF senior instructors to South Africa, Tanaka Sensei last in October 2008 (many previous), Ueki Shihan in November 2010 and Taniyama Sensei in October 2011 and now most recently Okuma Sensei. Okuma Sensei (pictured below with the SA JKA Governing Body) touched down in Johannesburg on Sunday 23 September 2012 after teaching in Angola, as part of the Sub Sahara Africa event. During Okuma Sensei’s short stay in South Africa he also taught in Kwa-Zulu Natal (Durban) and the Western Cape (Hermanus).

He presented morning sessions in Brakpan on Monday and Friday, and evening sessions at the Mandeville Sports complex on Monday, Thursday and Friday.
Saturday 29 September at Mandeville started with training for one and a half hours, followed by dan gradings and qualification examinations.

As this was part of a Sub Sahara Africa event and we had visitors from Kenya, Tanzania and Zimbabwe, training sessions were conducted by Sensei Edward Mtshali on the Tuesday, Wednesday and Thursday mornings in Brakpan and Kwa-Themba.

The training with Okuma Sensei was well presented and concentrated on fundamentals such as expansion and contraction. Sensei Okuma has a wonderful teaching manner and a fantastic sense of humour. We trust he enjoyed his brief stay in South Africa and thank him for a very good week of karate. OSS! 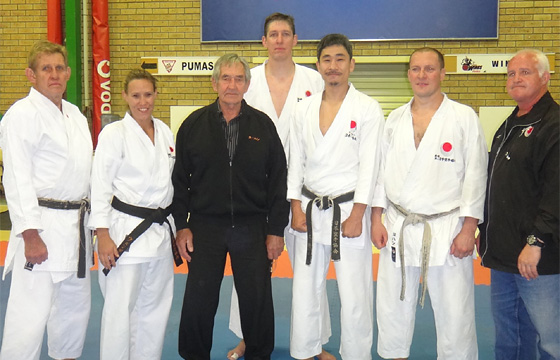 On Tuesday Okuma Sensei was in Durban and Sensei Clem Jolly had the following
to say:
” KZN JKA karate aficionados had the pleasure of training with a spirited Sensei Okuma on 25 September. The pilgrimage of a senior instructor from JKA HQ is consistently successful and Okuma Sensei did not fail to deliver high quality teaching. As always accompanied by SA JKA’s Sensei Johan La Grange and attended by senior dojo heads of our region, namely Sensei’s Robert Ferriere, Karen Prinsloo, Allan Naiker, Tammy Fry, Gareth Crowe and Clint Smit, we are reminded of how fortunate we are to have the local skill we have as well as SA JKA leading the way in making such seminars possible. It was well attended by KZN karate-ka, from as far as the South coast and a small delegation from Kwamashu.
Sensei Okuma’s focus on the correct basics, an uncompromising use of the thighs, hips and tanden, mixed with quick wit and humility made it a seminar packed full of information, yet easy to assimilate – the mark of a senior mature instructor. We look forward to their return! Thank you to all who made this possible, especially our own SA JKA! OSS!”

Sensei Allan Naiker had the following to say, ” SA JKA does it once again, another fantastic year with a Japanese master visiting our shores. Durban was honored and priviledged to have Okuma Sensei as a guest. A very sharp and technical two hour seminar.” 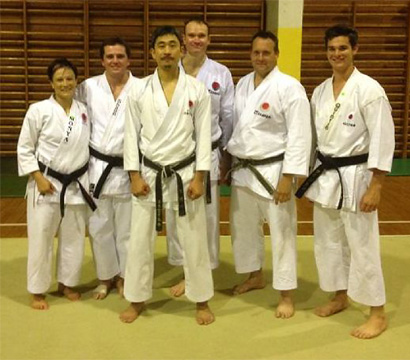 On the Wednesday it was off to Hermanus, Western Cape, and Sensei Ronnie Knott said the following:
” SA JKA Hermanus hosted Okuma Sensei and Johan La Grange Sensei on 26 September. Upon arrival we checked in at the Whale Coast Hotel and headed for the harbour. Sensei’s Okuma, Johan, Ronnie, Warren, Jon, Kokkie, and Burnett boarded the ski boat and headed out into Walkerbay. Only one snoek was caught but we managed to get some close up shots of whales with calves. After two hours at sea and freezing we headed back for a sushi lunch and then to the dojo for the evenings classes. Karate-ka from Belville, Stellenbosch, Vredenburg, PE and Mosselbay attended the training. Okuma Sensei was very impressed with the juniors saying that they were very strong and everyone enjoyed the class. The seniors also had a very intense class on contraction and expansion. The photo session afterwards took place with much laughter and ended the seminar with great knowledge being passed on. SA JKA Hermanus would like to thank Head Office for affording us this opportunity and a big OSS from us all.” 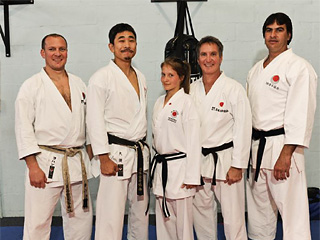 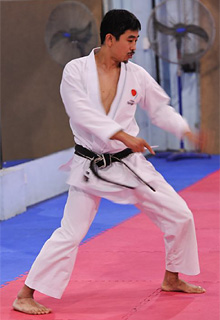 Above: Okuma Sensei – Johannesburg training at The Mandeville Sports Complex 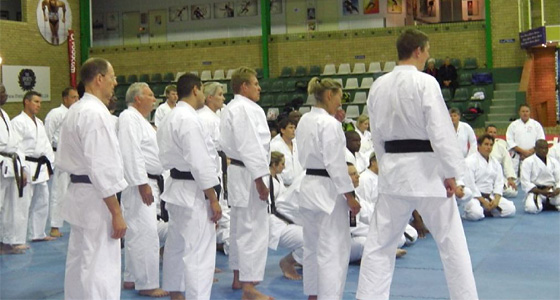 Above: The “Joburg” karate-ka listening and watching as Okuma Sensei teaches 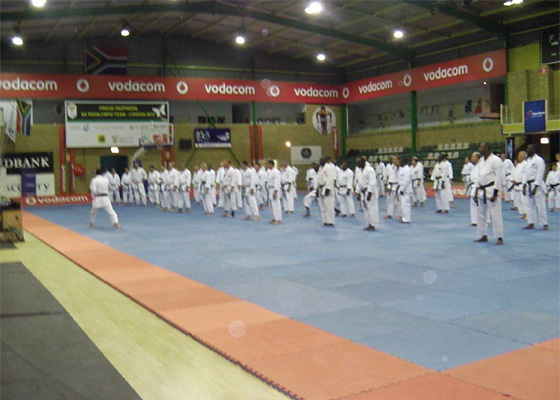 Above: Over 100 karate-ka training with Okuma Sensei – Monday 24 September