The 3rd Annual Monsoon Training Camp was acquired by Seizo Izumiya Shihan in the city of Raipur which is the capital of Chhattisgarh State in Central India. Shihan Izumiya was to visit India in 2012, but fell ill & did not come.

After the traditional lighting of the lamp inaugurating the Event, the Camp began with basic training in Ido Kihon, where the stress was laid on how to step in with vigorous speed. The emphasis was on the line of attack and defence. The various stances and basic techniques were explained with simple examples being used by him for demonstration. In order to ensure that we understood it completely, one of us would have to perform the technique being shown. He explained that the fastest and most effective way of improvement is to maintain an erect posture while moving in any stance or performing any technique. Using examples of a towel knotted like a ball and a mop stick he explained the impact of the direction of force used in different techniques. He also showed the example of the movement of a Door Hinge to explain the body / hips movement while demonstrating Hanmi & Shomen. Groups of three were made to practise the correct manner of waist movement & for training in Mae geri by using the obi for marking the course of movement.

The movements of the Heian Kata were elaborated with applications very clearly explained, especially the applications with combination of techniques being demonstrated. Kata Heian Nidan was taught with bunkai. Groups of three persons were made to understand the application of the first six movement of the kata While teaching Kata Bassai Dai, Izumiya Shihan explained that in order to be performed in rhythm the kata should embody the three principles of power in the technique (i.e. strong or gentle), speed of technique (i.e. slow or fast ), and expansion and contraction of body. Partner drills were initiated to make the applications even clearer and the difference between bunkai & Oyo was also explained while demonstrating the many throwing and locking techniques which were taught.

While teaching Kumite, Shihan very clearly explained that Kihon, Kata & Kumite complements each other. Therefore if kihon is not practiced diligently, one cannot achieve the desired result every time and if Kata is not practiced in rhythm then stance and reflex actions will not be swift enough and if kumite is not practiced in accordance with the principles laid down in kihon and kata it will never improve. The participants trained initially in Gohon Kumite and then proceeded to more advanced training. While giving an explanation in achieving reaction time training, he explained about the three different situations to attack – keeping in mind the opponent’s breathing, preparatory and post movements, one needed to plan and strategize based on the opponents movements & psychology. He demonstrated the use of these principles both as an attacker & defender. He made us form into groups for training in reaction timing against his techniques.

The emphasis of Sensei Ratna’s training was on basic Kihon and Heian Katas There are many people who participated in the Camp. .

The 4th JKA All India Kyu Level Championship washing simultaneously with the Camp and saw the emergence of many karatekas with good potential. Izumiya Shihan was present for the Prize Distribution and closing ceremony on the final day. The general opinion of the participants in this Monsoon Camp was that Izumiya Shihan is a fantastic teacher with great patience. The method used by him while teaching were practical & simple enough to make all participants understand clearly.

On behalf of all the members of JKA India, I thank the JKA Headquarters for deputing Izumiya Shihan for training us and look forward to to have more such a teachers visit India every year. 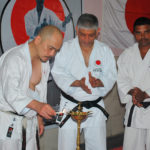 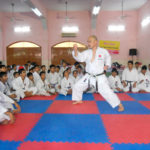 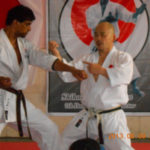 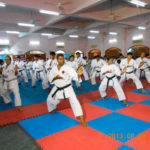 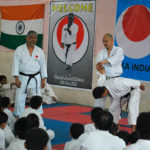 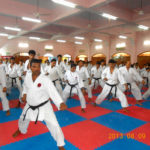 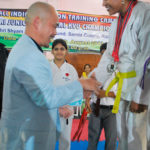 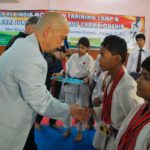