19 DEC: It was a great day training online with JKA HQ Instructors at the Keiko Osame (last training of the year 2021) hosted by the JKA HQ for Free for all the JKA members globally.

The training was divided into two sessions and one hour each session. The first was conducted by young and highly energetic Chubachi Sensei and the second was conducted by the highly experienced Imamura Shihan, Vice Chief Instructor of the JKA.

The focal points of the training sessions were the correct course of tsuki, uke, keri waza; koshino kaiten; use of joints generating power and drive from the floor through compression; balance; the importance of keeping the joints loose and flexible prior to the execution of a technique or move; key points of Kata Jion, Heian Nidan, and Kanku-Dai.

We are happy that about 70 JKAWF INDIA members (association instructors & black belts) from the Indian states of Kerala, Telangana, Karnataka, Maharashtra, New Delhi, Assam, and West Bengal have participated in this global event and gave their best effort with great spirit.

We on behalf of the JKAWF INDIA would like to express our gratitude and thanks to the JKA HQ for their kindness in offering such high standard online seminars for free supporting the global JKA family; two of the high calibre HQ Instructors, Chubachi Sensei and Imamura Shihan for their wonderful in-depth teachings, and Ippei Kamae Sensei for his excellent English interpretation.

20 DEC: The JKAWF INDIA has successfully conducted SHIDOIN KEIKO OSAME 2021 (Instructors’ Last Training of the Year 2021) at the JKA-Shotokan Karate Institute’s Honbu Dojo at Palta, West Bengal on Monday 20th December 2021. 30 Shidoin (association instructors) have attended the event mostly on-site in the dojo and a few over online.

The Kumite session was conducted by Pradeep Sharma Sensei that covered exercising Yori-ashi, Yori-ashi Kizami Zuki, Yori-ashi Gyaku Zuki, Yori-ashi Kizami Zuki – Gyaku Zuki; Mae Geri and land back without shifting the body centre and as soon as the kicking leg lands back he expected all to shoot for a long range Mae geri and land forward. To make a long-range Mae Geri Sensei added it’s better to sink (push forward) the front knee which is the knee of the supporting leg and kick with the rear leg. Sensei then made all practice Mae geri Jun Zuki followed by Mae Geri Jun Zuki & Gyaku Zuki. The next combination was his favourite combination of Yori-ashi Kizami Zuki Gyaku Zuki step-in Gyaku Zuki and Jun Zuki and Gyaku Zuki. Pradeep Sensei ended the session with 400 Gyaku Zuki, 200 each hand nonstop. The whole lot then did 20 push ups on their knuckles and Pradeep Sensei called off the session for 30 mins. The session was extremely intense and the shidoin were at the edge of their limit.

The Kata Session was on Kata Unsu taken by Somnath Palchowdhury Sensei, a highly detailed & enriching session as always expected from him. Somnath Sensei started with drills on the correct course of bringing both the hands together in front of chest, gradually lift up to the chin level and push both palms outwards straightening the elbows. The formation of correct chicken-head wrist block was taught and the course of striking downward with one-finger strike. Tate Shuto Uke in Fudo Dachi followed by Gyaku Zuki in Zenkutsu Dachi were practiced for many times at left and then right side by turning (mawatte) and then in four directions. Emphasised was placed in generating power and speed in Gyaku Zuki from thrusting the rear foot on the floor while changing stance from Fudo Dachi to Zenkutsu Dachi. Deep study and practice were done to adopt the correct course body dropping at the 45 degrees to the front and executing Mawashi Geri from the floor at the front (centre) direction. Ridge hand strike, Mae Geri, Jodan Soto Uke and Gyaku Zuki were then practiced many times coordinating Hiki-ashi, turn and Jodan Soto Uke timing and then Gyaku Zuki the moment you land for Zenkutsu Dachi. The Kata was then practiced for a few times up to figure number 29.

Both these sessions were attended online by one of the senior most veteran karateka of our country Anil Sinha Sensei who will chair the Technical Committee of the JKAWF INDIA organisation from now on. The association instructors that attended the last instructors’ training of the year on the day were highly inspired by his presence, watching Sensei Sinha training nonstop at the age of 69 years and benefited from the tips shared by him.

Overcoming the Coronavirus pandemic and restrictions for nearly two years now in India the JKAWF INDIA wish to start the new year with new hope, strong belief and with even more confidence to embark on a new journey in the year 2022. 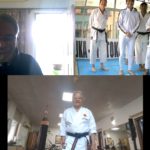 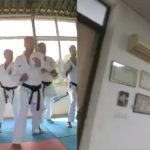 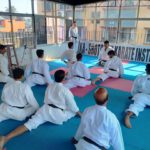 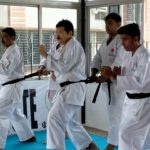 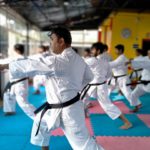 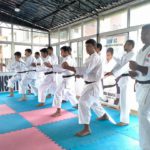 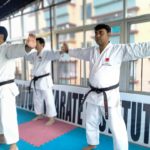 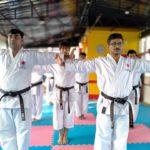 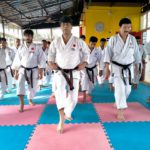 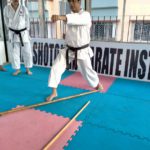 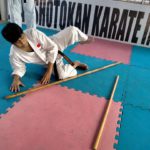 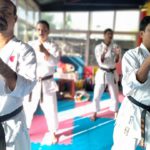 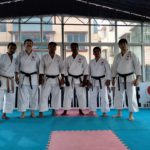 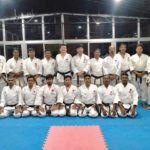 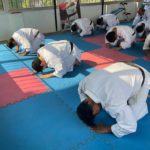