JKAWF INDIA hosted its big event after almost two and half year of Covid-19 related restrictions. It’s expected that the event will be a big hit being this one would be conducted by very popular Shiina Sensei after a long interval. This time the JKAWF INDIA leadership had decided to take Shiina Sensei at the remote districts of the state of West Bengal where JKA karate gained immense popularity in recent times. The plan turned to be very successful serving the purpose of reaching out the suburban’s students and parents passing them on the teachings, culture, tradition and benefits of the JKA Karate-Do from none other than the Technical Director of the JKA himself.

MAY 17: The first day of the week-long camp started in Kolkata for the selected 300 members of Kolkata and neighboring districts. Shiina Sensei took the group through various ‘sonaba kihon’ and ‘ido kihon’ followed by Kata Heian Shodan – Godan, Tekki Shodan, and Bassai-Dai and concluded with rigorous repetition of Gohon Kumite. Shiina Sensei handed over JKA Dan Diplomas to the successful candidates that passed various ranks through online tests conducted from the JKA Headquarters in December 2020 and April 2021.

MAY 18: The second day was allotted for Purba Bardhaman, the district town of Purba Bardhaman district of West Bengal 104 km far from Kolkata. Little more than 250 JKA members of the district did participated on the day with excitement and high expectations as this is for the first time a foreign instructor of such caliber was to visit the town. The organizers were estimated that around 300 parents will be accompanied too to witness this historic event and therefore booked an AC auditorium providing a giant screen where the proceedings of the training will be telecasted live for the parents. The arrangements made the parents immensely satisfied and allowed the participants train without interruption in a separate AC hall of the Lion’s Club of Burdwan. Shiina Sensei went deep in to teaching kihon waza and various forms of kumite. Shiina Sensei handed over JKA Dan Diplomas to the successful candidates of the district at the end of the training.

MAY 19: The third day was the day for the JKA members of Nadia district. The event was held in the historic city of Krishnagar 140 kms far from Kolkata. About 250 members did attend from the different corners of the district. Training was rigorous and exhausting due to scorching heat and the hall was not air conditioned (there’s no AC auditorium in Krishnagar to accommodate such crowd). Shiina Sensei focused on kumite that involved lots of foot works and kicks. Shiina Sensei handed over JKA Dan Diplomas to the successful candidates of Nadia district. The JKA Nadia management hosted a wonderful dinner party for Shiina Sensei in a wonderful Bengali Restaurant at the end of the tiring day.

MAY 20: The fourth day was rest for Shiina Sensei and continue three days of travelling and teachings. Sensei was invited for a private dinner at Somnath Palchowdhury Sensei’s flat and it seems that Sensei has thoroughly enjoyed the home-made Bengali cuisine. It’s a great private evening while Shiina Sensei experiencing Indian hospitality and many things for the first time as it’s Sensei’s first visit to an Indian home.

MAY 21: The fifth day was scheduled for ‘Shidoin Keiko’ – Instructor’s Training, Judge’s Seminar followed by JKAWF INDIA Instructor’s Meeting and Annual Gala Buffet Dinner. The day was extremely demanding with lots of repetitions of kihon, and kumite techniques with four different opponents attacking from four directions. Kata Heian Shodan – Godan, Tekki Shodan – Sandan were checked and rectified closely. The JKA Judge’s Seminar was also long and in depth. The participants had to go through judging the mock matches held under the supervision of Shiina Sensei. Shiina Sensei handed over the JKA Licenses of Instructors, Judges and Examiners to the qualified Shidoin and surprised the 70 association instructors attended the event from 10 states while Shiina Sensei announced the awarding of new JKA Membership Certificate in the name of ‘JKAWF INDIA’. Shiina Sensei read the certificate in ceremonial way and said ‘this is very important’ and significant for the organization. To celebrate the occasion Shiina Sensei cut a beautiful handmade cake made by Shidoin Pampa Saha. A meeting was held at the banquette hall of the Space Circle Club for an hour followed by annual gala buffet dinner. All enjoyed the food and drinks, taken loads of memorable pictures and got the opportunity to meet with old friends and make new friends that joined JKAWF INDIA in recent past.

MAY 22: This was the last day and the most tensed day for all as it’s the day for JKA Dan Tests and License Examinations. There were 64 Dan and 13 License examinees in line prepared for their names to be called. The examinations continued from 2pm to 5pm under the watchful eyes of Shiina Sensei. Shiina Sensei took us all by surprise when he called the Technical Committee Members that are ‘Examiner C’ to constitute a panel to assist Sensei and sit beside him moment before the examination began.

Somnath Palchowdhury Sensei, Chairman of the JKAWF INDIA has called off the Gasshuku by thanking Masaaki Ueki Shuseki Shihan, Chief Instructor; Seizo Izumiya Shihan Senior Managing Director; the JKA Headquarters and Katsutoshi Shiina Shihan Technical Director for their kind support, trust and guidance for last 7 years. Somnath Sensei has also acknowledged the support and contribution of association instructors that are instrumental in promoting and popularizing JKA Karate-Do all over the country and for their help making this year’s event a grand success. 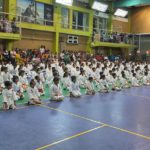 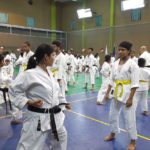 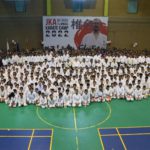 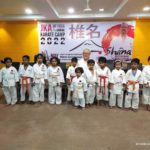 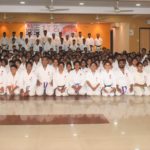 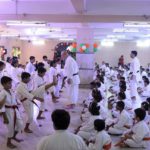 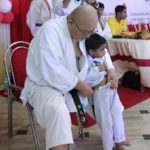 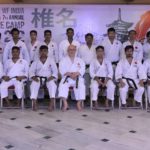 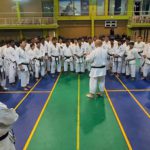 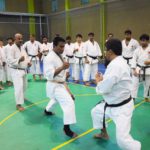 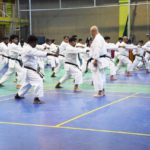 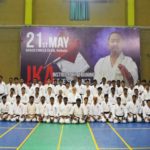 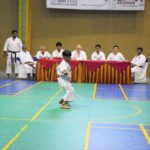 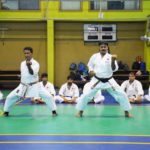 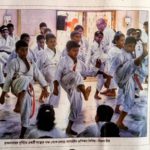