The “JKA Indo-Bangla Karate Camp 2020” concluded successfully in Kolkata. The JKA HQ instructor Katsutoshi Shiina Shihan, 7th Dan was assigned by the Headquarters to teach in the gasshuku and conduct examinations. This was the 7th visit by a JKA Instructor hosted by the “JKAWF INDIA Kolkata” since 2016.

To avoid huge crowd at a time like last few years in all the JKAWF INDIA Kolkata camps, this year the training itinerary was designed by splitting the days and sessions according to the rank of the participants. This made Shiina Sensei easier to focus on the limited numbers and plan his lessons as per ranks. The participants also thus received more attention from Sensei and were naturally happier.

Thu 23rd Jan: The camp was inaugurated by Ms. Risa Tamura, the Vice Consul General of Japan in Kolkata as Chief Guest. In her important inaugural speech, she said: “The ultimate purpose of karate is not only physical expertise or just the winning of matches. It is the development of balance, harmony, spiritual and physical strength through strict and disciplined training. The Japan Karate Association is the first organization to send qualified instructors abroad to spread the martial arts of Japan. Consulate General of Japan in Kolkata is happy to note that one of its branches, the ‘JKAWF INDIA Kolkata’ is working hard to promote the karate-do as martial arts and trying to aware Indian people the benefits of budo discipline, Japanese culture and custom. I take this opportunity to extend my best wishes to all participants of this karate camp. The very fact that you have chosen this difficult sport deserves great applaud.”

The first day was exclusively for the instructors and was attended by 54 ‘shidoin’ – karate instructors of the organization. There was technical training for two sessions for two hours each session. Shiina Sensei had taken all the instructors through rigorous kihon-waza that would help them develop great kumite. He then focused in various forms of gohon-kumite that the instructors found difficult to cope with. The instructors training on this day later expressed that they never found gohon-kumite this difficult as taught and demanded by Shiina Sensei. All faces were noticed scary when Shiina Sensei told that most of the karateka passed out of Takushoku University Karate Club and JKA Kenshusei (two years instructors’ course) lose their front tooth (central incisors and canine cuspids both upper and lower) during such high voltage gohon or ippon kumite sessions. Sensei was very particular about the correct route of all kicks and advised all to work harder on kicks. In kata, Sensei covered Heian-Shodan, Bassai-Dai, Jitte and Nijushiho. His particular attention was on the adaptation of various hip movements during different moves and techniques and the benefits of the same. He then stressed on the importance of uniformity of teachings and standardization of techniques for JKA instructors to adopt. He advised that the instructors are to be role model for the students to follow. The third session of the day was for JKA Judge’s Seminar for one hour. Sensei stressed the need of being good impartial judge to do justice to the contestants.

The “General Meeting of the ‘JKAWF INDIA Kolkata’ Instructors” was being held from 5:30 to 7pm chaired by the visiting JKA Director Katsutoshi Shiina Shihan that was attended by all the ‘shidoin’ – member instructors from all states. New members and groups were welcomed, General activities, Calendar of Events and the future path were discussed, agreed and set; various association commissions were made and their duties and responsibilities have been discussed and noted. Shiina Shihan expressed his satisfaction with overall development of the organization and with the numbers of JKA Passports and JKA Kyu Certificates procured by the JKAWF INDIA Kolkata in 2019-20.

Thu 24th Jan: The second day of the camp was for Brown and Black belts and divided in to two sessions; with each session for two hours. There were 145 Brown and Black belt candidates present. The theme of the day was set high for the preparation for JKA tournament, kihon-waza that help develop spirit, speed, stamina for JKA style jiyu-kumite and partner work. Heian Kata were covered. Sensei found the girls attending the gasshuku were more prospective than the boys and all need to work harder to develop kicks and stamina. Sensei was happy with the Kihon and Kata performance in general but advised to practice Kumite more in regular basis in dojo.

Fri 25th Jan: The third day of the camp was divided in to two sessions. Each session was for two hours; while first one was for 10th Kyu to 7th Kyu and the second one was for 6th Kyu to 4th Kyu students. To further reduce the crowd, each dojo was instructed to shortlist their best and most regular students to participate in this camp. However, the total number of Kyu ranked students attended on the day were over 250. Again, observing the technical standard of the participants, Shiina Sensei decided to focus his teachings on kumite and therefore, Kihon Ippon Kumite was practiced intensely beside ido-kihon in the first session whereas Jiyu-Ippon-Kumite was the main theme for the second. To develop kicking skill in kumite Shiina Sensei pushed the second group through loads of kicking combinations to work against a partner using Kezami-mawashi-geri, Gyaku-mawashi-geri and Mawashi-geri. Kata Bassai-Dai, Jion and Enpi were practiced.

The “JKAWF INDIA Kolkata” would like to thank all 450 participants, their parents, well-wishers, the sports hall authorities – Springfield Projects Pvt. Ltd. and Raipur Club, Consulate General of Japan in Kolkata and Shiina Shihan for his sincere efforts and guidance and the JKA Headquarters for believing in us and continuous support for last five years. 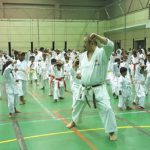 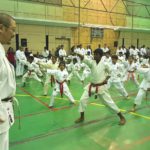 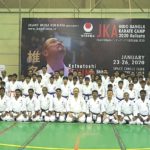 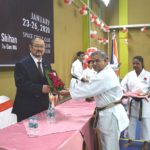 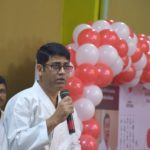 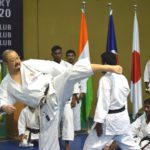 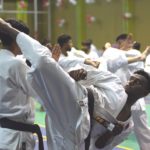 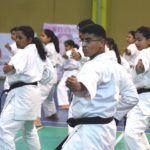 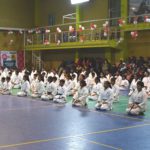 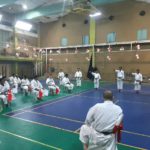 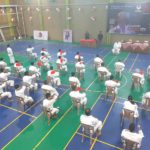 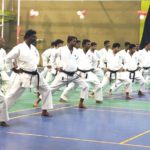 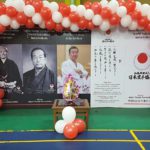 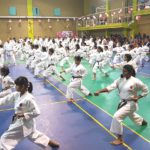