His Majesty the Emperor of Japan’s Birthday (天皇誕生日 Tennō tanjōbi) is celebrated on 14th December, 2018 by the Consul General of Japan in Kolkata at Hotel Taj Bengal.

Mr. Somnath Palchowdhury, Chairman of JKAWF INDIA Kolkata was invited along with his wife by the Consul General of Japan in Kolkata Mr. Masayuki Taga himself, to represent the JKA in the reception.

The prestigious event was attended by the high level government dignitaries of the state of West Bengal, ambassadors of other countries in Kolkata and local intellectuals from various fields, such as music, arts, literature, cinema etc. Also present the business community that are involved with anything related to Japan.

Mr. Palchowdhury was introduced by Mr. Taga to many dignitaries that showed keen interest in JKA’s budo karate and its various benefits in human development. The topic of JKAWF INDIA Kolkata’s effort to promite and popularise JKA Japanese budo karate, discipline and manners in India through the curriculum of karate are discussed and appreciated by many.

In the menu, large variety of delicious Japanese, Indian and a few continental dishes were offered to the invitees. The most liked item amongst the Invitees were Prawn Tempura served from the live counters. A long queue was always seen at the Tempura counter all throughout the party.

Mr. Taga has been informed about the “2019 JKA Indo-Bangla Winter Camp” and he has kindly agreed to be the Chief Guest of the inaugural program of the Kolkata gasshuku on 19th January 2019. 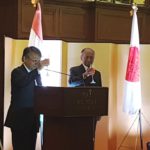 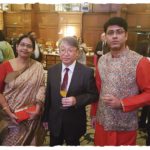 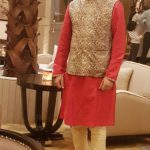 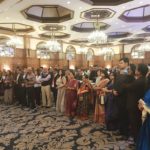