The “2018 JKA Kolkata 3rd Annual Karate Camp” hosted by the “JKAWF INDIA Kolkata” concluded with tremendous success with Katsutoshi Shiina Shihan 7th Dan JKA as the visiting instructor from the JKA Headquarters, Tokyo. The gasshuku was scheduled from 28 April to 1 May, 2018 at Netaji Indoor Stadium, the largest indoor stadium in India, Khudiram Anushilan Kendra and Sunrise Symphony all the venues in Kolkata.

Shiina Shihan landed Kolkata on 28 April mid night and taken to the beautiful “Floatel”, the first eco-friendly floating hotel of our country on river Ganges. The major venues of the event both NIS and KAK were at the bank of the river across the road.

Day 1 : The four hours session held in centrally air conditioned ‘Khudiram Anushilan Kendra’ that has wooden floor was divided in two separate sessions of two hours each with an hour of lunch break while the vegetarian and non-vegetarian “lunch box” have been provided to all. Over 200 members were in attendance. It was the day for ‘brown and black belts’ and therefore Shiina Shihan’s teaching was structured accordingly to suit the technical standard and need of the participants. In the first session Shiina Shihan had covered the fundamental points of karate; Kihon Waza and Tachi Waza. Great deal of emphasize were put on correct hip rotation, hip thrust, hip vibration, body contraction and expansion, Unsoku, Taisabaki and Hiki-ashi. Loads of Sonaba Kihon and Ido Kihon had been done slowly and then in full speed and power to physically memorise the said technical points. The Dan candidates had to go through the JKA syllabus under the watchful eye of Shiina Shihan checking and correcting each of them personally. Second session was dealt with all five Heian kata, Tekki Shodan, Bassai Dai, Kanku Dai and Jion. The Kata Bunkai and Oyo were discussed and demonstrated.

Day 2 : This was the BIG day for all as it was Sunday and the official Inaugural Ceremony of the camp. The “JKAWF INDIA Kolkata” did celebrate the “3rd Anniversary” of the organisation, “70th Foundation Year of the JKA” and “Shoto-Sai” 29th May, the day mourned by JKA in the memory of O-Sensei Gichin Funakoshi. To commemorate these, over 1200 member karateka got together at fully air conditioned Netaji Indoor Stadium to train under one roof under the guidance of Shiina Shihan for four hours. The ceremony was attended by many of the dignitaries that include Mr. Masayuki Taga Consul General of Japan in Kolkata, Mr. Premjit Sen President of Karate-Do Association of Bengal holding many technical qualifications in WKF and responsible positions in KAI the national federation of India, Chess grand masters Mr. Dibyendu Baruah and Mr. Surya Sekhar Ganguly, martial arts exponents Mr. Shivaji Ganguly of Kyokushin Karate, Mr. Avijit Mitra of Aikido, Mr. Montu Das of Kick Boxing and Mr. Ranjit Sharma of Muay-Thai. Everybody praised the leadership of the “JKAWF INDIA Kolkata” for whatsoever have achieved so far only in three years for the growth of JKA karate in the country. In India this has been the largest gasshuku ever staged under one roof. There were over 2500 parents too, present as spectator in the gallery beside a big number of media personnel to cover the event. Due to the huge number of participants for an instructor to teach, a giant LED Screen has been installed at the centre of the stadium so that each and every participant can view the technical details displayed by Shiina Shihan without any obstruction while Shiina Shihan was covered by multiple cameras from different angles. Shiina Shihan has proudly announced this gasshuku as the largest JKA gasshuku in recent history of JKA. Both the sessions of the day were covered with various Sonaba and Ido Kihon drills, Heian Kata and Kihon Ippon Kumite. All were provided with vegetarian and non-vegetarian “lunch box” during the one hour lunch break.

Day 3 : The structure of the day was similar to the “Day 1” held at ‘Khudiram Anushilan Kendra’ again but focussed for the Kyu grades. About 150 members were in attendance. This was probably the best technically informative day of this year’s gasshuku. Besides the technically focussed training for the Kyu grades during the first session the second one turned to be specialised session for the seniors present. The JKA Nidan and Sandan candidates got the opportunity to be checked and rectified by Shiina Shihan. Advance Kata Wankan and Nijushiho were practiced beside Tekki Shodan, Tekki Nidan and Yakusoku Kumite drill against three opponents. Shihan paid great attention to the meaning (Bunkai) of key movements of each kata that were covered on this day. The training hall busted in applaud while Shihan displayed some of his kumite skills on his chosen opponents, the few that felt fortunate and honoured to be beaten up by the master. The seminar ended with lots of praise, motivational advice, tips from Shiina Shihan while the trainees were dying to have more from the master despite of the bruises, aches and soreness from the hard-core JKA training.

Day 4 : The day four was for Examinations and was tensed. JKA Dan tests were held for Shodan through Sandan and JKA Licensing Examinations for JKA Instructor D, Judge D and Examiner D being Shiina Shihan as the Examiner assigned by the JKA Headquarters. This event was hosted by one of “JKAWF INDIA Kolkata” affiliated dojo in Sunrise Symphony a fully air conditioned sports hall with wooden floor. A good number of members have passed JKA Dan and other qualifications with flying colours made Shiina Shihan visibly happy with the performance. Two of the Shodan candidates that passed are only 7 years old.

The Board of Trust and the Governing Body of “JKAWF INDIA Kolkata” bid goodbye to the caring teacher Shiina Shihan on 2 May at the Kolkata NSCB International Airport and look forward to have him back again soon. 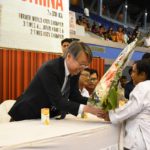 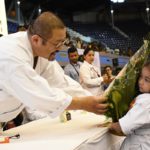 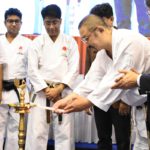 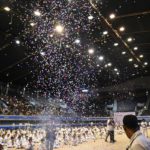 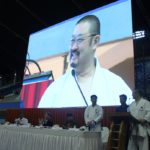 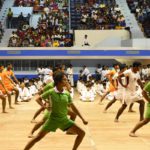 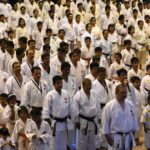 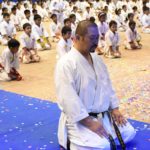 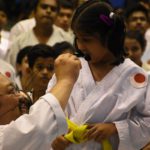 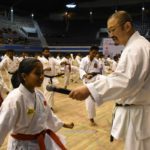 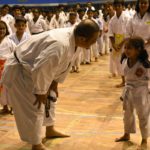 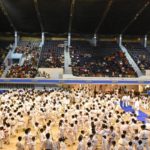 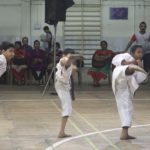 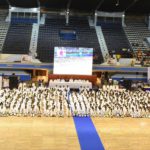 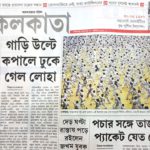 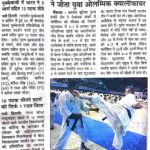