This year our International Training Camp was a little bit delayed because of the JKA World Championship, we had it in the end of October. We would like to say thank you to the JKA Headquarters to make it possible with Kurihara Kazuaki Sensei.

Kurihara sensei taught the 250 participants with his characteristic accuracy and fine technical details. We were a little bit fewer this year because of the changed date, foreign participants came from Germany, Switzerland, Slovenia and Norway.

The basics were highly emphasized all through the camp.

The main topic we requested was unsoku, how to move the legs and how to form good, stabil, strong stances. We focused on that through kihon and kihon kumite excercises, and put a strong emphasis on the proper hips work, that is essential in JKA Karate. Kurihara sensei showed every technical detail perfectly, in slow motion and with full speed also, we got a really professional presentation of all the technics.

We put extra attention to kime, the importance of contraction and expansion, checked the contra directional movements while focused on the footwork and the right way to turn the feet.

Our main topic was unsoku, how to move from one stance to the next one and how to use the hips on the way. Oi zuki, gyaku zuki and mae geri were the main technics, they came back later on in different exercises with partners with varying difficulty levels.

Sensei put an extra emphasis on unsoku in the katas also, proper turns and the right hips work while executing them. Watching him doing the technics in slow motion helped us a lot to inspect the right hips work, but most of us had great difficulties trying to copy that – his moves are truly exceptional. We put extra efforts to understand the use of the supporting leg that ensures the proper turns of the hips and the continuity of the movements until the end point. Finding the balance between flexibility and tension especially during slow motion was a really challenging task for most of the participants.

We practiced the Heian katas, Tekki shodan and Tekki nidan, got answers for the technical details and emphasized the proper hips work in kiba dachi. This year we talked a bit more about the connection between the Heian and the Shitei katas and the way of practicing them.

Practiced one of the favorite kata of Sensei, Gankaku and went through Gojushiho sho and Gojushiho dai technics by technics.

Practiced with partners also, starting from kihon ippon kumite, through kaeshi ippon and jiyu ippon kumite we got to a combination where we used 6 basic technics. We executed the blocks with tai sabaki, the attacker followed the movement of the defender to have a perfect zanshin. Attacking roles changed continuously, so in the end it looked a little bit like jiyu kumite, focusing on speed more and more during the exercise. Being a good practice, it gave us really good ideas to get ready for jiyu kumite.

This year Sensei put extra attention controlling the participants work – from the quality and the intensity point of view as well.

At the official dan test in the end of the camp 20 people graded successfully (9 shodan, 3 nidan, 2 sandan, 4 yondan, 2 godan) and 3 took a successful qualification test.

At the banquet we showed our gratitude to Kurihara Sensei for his devoting teaching and congratulated him on his 10th All-Japan Kata Champion title. 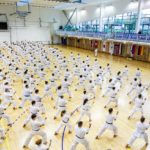 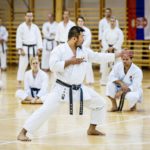 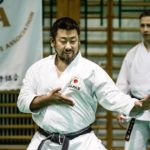 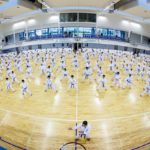 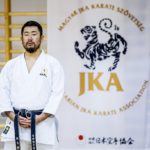 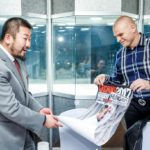 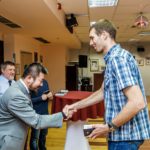