Germany. The Shotokan Karate Dojo in Bad Salzuflen. The Shotokan Karate Dojo in Bad Salzuflen, 100km away from Hanover and with about 55.000 inhabitants succeeded in inviting Sensei Katsutoshi Shiina (7th Dan), trainer at the Takushoku University Tokyo, to his 40th anniversary in Germany.
Chairman of the association, Frank Herholt (4th Dan) succeeded in establishing contact to the Sensei through his student Naim Barakzai (1st Dan). Naim Barakzai trained under Sensei Shiina about 30 years ago in Pakistan. Today Naim Barakzai trains under Frank Herholt in the Karate Dojo Bad Salzuflen, which is one of the biggest Dojo´s in Germany.
Through the endorsement of Shihan Hideo Ochi (9.Dan), Chief Instructor of JKA Europe, the request to the JKA Headquarter for Sensei Shiina could be made and the invitation to Germany by Frank Herholt nothing more stood in the way.
After one year of preparation Naim Barakzai and Frank Herholt could pick up the Sensei from the airport in Hanover on September 19th armed with a bouquet of flowers.
The Sensei was accommodated in one of the most beautiful hotels in Bad Salzuflen, in the Bestern Western Hotel.
In the afternoon the first training began and from there the Sensei taught three times a day from Wednesday to Friday about 70 students and friends from the Dojo Bad Salzuflen and on Saturday at the actual seminar with about 200 Karatekas. On the about 300qm² large training area in the Dojo and in the later sports hall on Saturday, the Sensei put strong emphasis on the correct execution of the stands, the interaction between hip and state with the actual technique, the Heian Katas, the Bunkai, but also the Katas, Bassai dai, Empi, Kankû dai and Gangaku did not miss out. The students were fascinated by the master’s skills and during the Kumite training in the group all students reached their physical limits, but the Sensei always managed to encourage the students to continue with his friendly, sympathetic but also very direct way. The Dojo presented the Sensei as a thank you, a glass trophy, a watercolour painting with the portrait of the Sensei by the highly acclaimed artist, Redzep Memisevic, a T-shirt with Dojo logo and many small treasures from Bad Salzuflen.
After the daily training, the dojo invited to a barbeque in the dojo or for dinner in the restaurants, in the evening or during the day. Guided the Sensei to typical excursion destinations such as the graduation works in Bad Salzuflen or the Externsteine. The graduation towers are used as open-air inhalatories and produce a sea-like climate. The Externsteine – a striking rock formation towering about 40m high – are among the best-known natural and cultural monuments in Germany.
Unfortunately, on 24.09, after an instructive, partly painful, but very beautiful time, we had to say goodbye. The Shotokan Karate Dojo Bad Salzuflen would be very pleased about an ongoing good cooperation and perhaps it will get the opportunity to invite a trainer from the Takushoku University again in 2020.
Best regards from Germany
Frank Herholt
Shotokan Karate Dojo Bad Salzuflen
www.karate-salzuflen.de 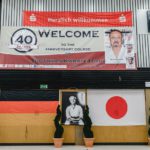 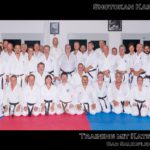 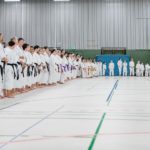 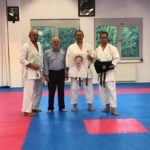 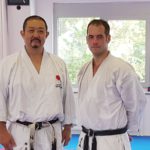 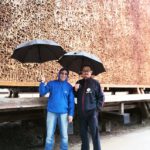 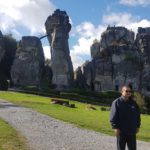 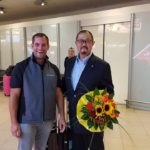