This exciting seminar featured JKA HQ Instructor Shiina Katsutoshi Shihan. The week opened with a respectful tribute to the pioneers of JKA karate in Quebec, Canada, followed by an intense seminar and included the Francois Gelinas JKA Kirkland Tournament with two special awards being presented. Kyu, Dan and qualification examinations were held.

The 4 pioneers of karate in Quebec Ives Beaudin, Jacques Lapalme, Reynald Leboeuf and Conrad Montanarini were the first pioneers to lead JKA karate in Quebec, Canada. A reunion of surviving Yves Beaudin, Jacque Lapalme and two of their students François Gèlinas Sensei and Glles Deslisle took place with Shiina Katsutoshi Shihan over an evening supper of reminiscent story telling.

Shiina Katsutoshi Shihan, as always, delivered an intense week of training kumite, kata and bunkai. Participants were pushed to their limits developing their skills and character. Ages ranging from 4 years old to +85 from many dojos were present.

The support and contribution from the honorary Kirkland Mayor Michel Gibson and Member of Federal Parliament Francis Scarpallegia helped in the successful opening of the Francois Gelinas JKA Kirkland Tournament. Over 70 participants joined the tournament where participants demonstrated their competitive nature. Shiina Katsutoshi Shihan being Master Chief Judge guided us all.

Francois Gelinas Sensei, original student of the JKA Quebec pioneers and the first JKA Kirkland instructor from 1985 was presented with a lifetime achievement award for his sincere contribution to JKA karate in Quebec and Canada.

Carole Canaan Sensei, first student of Francois Gelinas was presented with congratulations on the opening of her new dojo in Pointe Claire, Quebec.

The Saturday evening supper featured musical gigs and a delicious international cuisine buffet from our very own members. A delicious treat and discovery of some hidden talent of our very own.

The week was an extraordinary compilation of JKA Kirkland members, collaborating dojos, special guests and Shiina Katsutoshi Shihan in what was a tremendously successful week. It continues to deliver a pathway to the future growing generations of JKA karate 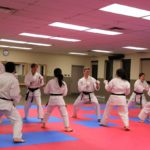 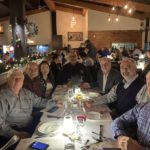 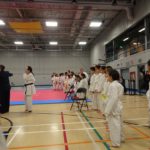 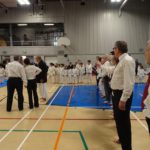 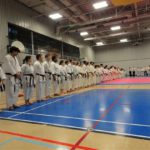 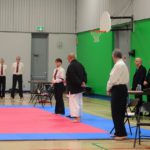 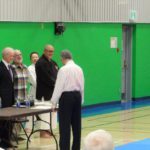