For several years already, this ‘Spring Gasshuku’ is one the biggest event on the calendar of JKA Belgium.
Moreover, this edition had a special character, because it was actually at 1968, some 50 years ago that Miyazaki Shihan founded the Belgian Karate Federation in favor of the JKA-style which was the basis of the actual JKA in Belgium.
Since that time special contacts and privileges were formed between Japan and Belgium.
In 1993, Miyazaki Shihan past away, and since then Gneo Sensei took over still continuing the values from our sensei : humility, respect, tradition and loyalty.
All famous instructors of the JKA Headquarters visited Belgium ever since.
It started with the late Nakayama Shuseki Shihan and each year still a dozen of JKA Headquarters instructors visited Belgium !
This year we had the honor to welcome Ueki Suseki Shihan, the chief instructor of our world federation, himself for the third time and this time for the 50th anniversary of JKA Belgium.
Other famous JKA instructors completed the poster of this camp : Bura Sensei, technical director JKA Europe, Ogura Sensei, managing director JKA HQ, Ogane Sensei, instructor JKA HQ, Ohta Sensei, chief instructor JKA England, the Belgian staff represented by Gneo Sensei as chief instructor and Sawada Sensei as national instructor, together with the highest Belgian instructors and members of the national selection squad, all ready to serve the big amount of karateka present.
Thanks to a formula of very democratic prices, the public has largely responded to the invitation of the organizers : not less than 840 participants exchange knowledge, sweat, practiced karate and were led by several instructors while divided in groups according to the level of experience and age, in the beautiful sports centre of Louvain-La-Neuve.
The courses were especially focused on the standardization of Bassai Dai, Jion, Gankaku and Nijushiho by Ueki Shuseki Shihan.
The other JKA instructors showed their skills in different kata such as Bassai Sho, Kanku Sho, Sochin, Chintei. Especially the rhythm, the Kihon Waza of the kata and the application of the techniques of the Kata.
As about 85 % of the participants at this gasshuku were members of JKA Belgium, one must emphasize that the remainders were represented by some 10 other nationalities, such as : Germany, Italy, Denmark, Sweden, the Netherlands, Marocco, France, Luxemburg, Russia and the Democratic Republic of Congo.
The high educational level of instructors, the quality of the organization and the enthusiasm of the participants, made from this event to a ‘big party’ for the JKA karate. Thank you all for this !! 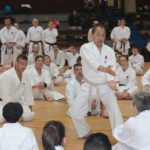 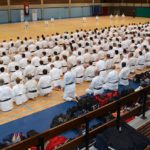 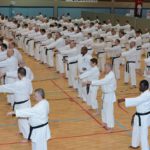 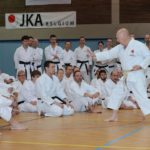 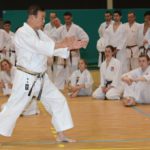 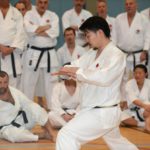 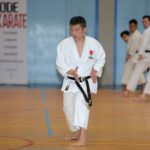 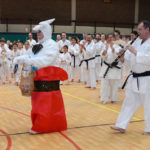